See the news on our Linkedin page

IAS Handling has coordinated the cargo handling at destination in Barcelona and Madrid of more than 25 cargo planes, with a average between 500 and 600 meters cubic sanitary material in every flight since it was unleashed the Covid-19 pandemic. We have managed to date about 12,500 cubic meters of protective equipment for face health crisis ", explains to this newspaper the director IAS Handling executive in Spain, Ricardo Bagen.

The company decided to join to the initiative of the sanitary corridor in response to the drop in workload in the sector regular cargo air. "We were very concerned because our main clients started to stop flying, we notice decreased flow load and we start to see where niche market we could enter to save the situation, the structural costs of a handling are huge, with warehouses on the front line, personal ... ", Ricardo Bagen relates. "It was a complicated situation."

At that time, the CEO of IAS Handling in Spain, a round of meetings began with freight forwarders and GSA, they were preparing the corridor sanitary. "I saw that it was going to be managed the arrival of loaded planes with sanitary material and I thought it was an opportunity for us". So "I got involved a lot on this topic and we got many contracts charter with different companies aerial, to bring material sanitary ”, details Bagen.

"It has been an extremely stressful ”, he assures. But, at the same time, also rewarding because we have seen immersed in an operation that has helped that material will come to Spain ”.

Thus, IAS Handling has contributed the handling coordination of loading at destination in Barcelona and Madrid and has also collaborated in customer distribution final. In this sense, "we appreciate the trust they have placed in us companies like, Modaltrade and DSV, with whom we have worked very much, ”says Bagen.

Ricardo Bagen details that the adaptation to the “work rhythm extreme "that this situation has been possible thanks to a structuring of the company “Based on operations punctual ”. "We were in a very demanding operating environment, and at the same time difficult, in which we had to keep our distance and security measures and necessary prevention, despite how complicated it was. ”

"We were very concerned that our main customers started to stop flying, we noticed the decrease in cargo flow and we began to see what niche we could enter to save the situation"

"The key to everything has been the involvement the planning team of these operations and its complexity which has been shown available and flexible in every moment ”, he highlights.

Although it is difficult to predict how the health crisis will evolve in the coming months, Ricardo Bagen is convinced that freighters with sanitary material they will decrease. "Why, although it will be needed medical supplies, I doubt it is in the same quantities. Further, with the reopening of the industry, I think it will rise from again the general cargo ”.

Therefore, “our objective now is to remain very flexible to keep us positioned well in the market as a medium operator that we are, as we watch how airlines start again to fly". "Some of our clients have already done so, with cargo flights adapted in passenger planes ”, he concludes.

See the news on our Linkedin page 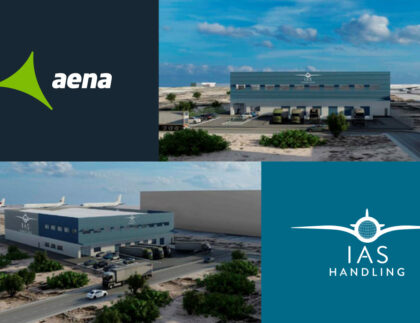 vamtam-theme-circle-post
 Category Press
See the news on our Linkedin page IAS handling has been awarded a 30 years...
 Tags aena, aircargo, airfreight, airportservices, barajas, firstline, iashandling, newcontract, transportofgoods
Read More

We use cookies on our website to give you the most relevant experience by remembering your preferences and repeat visits. By clicking “Accept”, you consent to the use of ALL the cookies.
Cookie settingsACCEPT
Manage consent

This website uses cookies to improve your experience while you navigate through the website. Out of these, the cookies that are categorized as necessary are stored on your browser as they are essential for the working of basic functionalities of the website. We also use third-party cookies that help us analyze and understand how you use this website. These cookies will be stored in your browser only with your consent. You also have the option to opt-out of these cookies. But opting out of some of these cookies may affect your browsing experience.
Necessary Always Enabled

Performance cookies are used to understand and analyze the key performance indexes of the website which helps in delivering a better user experience for the visitors.

Analytical cookies are used to understand how visitors interact with the website. These cookies help provide information on metrics the number of visitors, bounce rate, traffic source, etc.

Advertisement cookies are used to provide visitors with relevant ads and marketing campaigns. These cookies track visitors across websites and collect information to provide customized ads.

Other uncategorized cookies are those that are being analyzed and have not been classified into a category as yet.